Wheat markets have seen some solid support over the past fortnight as US futures markets continue their rally and east coast weather concerns support domestic demand. New crop production estimates have lifted higher again on the back of favourable weather in major exporter countries.

The June WASDE forecast world wheat production higher again this month, up 3.34MMT to sit at just over 780MMT. The biggest increases came from India, up 1.2MMT, as well as 1MMT for both Russia (78MMT) and Ukraine (30MMT). Local Russian sources have the wheat crop forecast at 82.2MMT (4.2MMT higher than the USDA) on the back of favourable conditions thus far. The USDA put the Russian production increase directly toward their 19/20 export program; now projected at 37MMT. Ukraine’s exports are projected to reach a record 19.5MMT (up 0.5MMT from May estimates). 2019/20 world wheat consumption was also raised 3.6MMT due to higher domestic use. However, with total supply rising more than use, ending stocks are projected up 1.3MMT to a record 294.3MMT.

US wheat is continuing to drive the market after being inundated with wet weather for the past 2 months, diminishing crop prospects for row crops and spring wheat. The wet weather has also affected quality of winter wheat with reports of high yields but low protein. 64% of US winter wheat is still rated good/excellent (based on yield), up significantly from last year’s 38%. US winter wheat harvest is only 4% complete as fields remain overly wet, compared to 13% last year and the 5-year average of 10%. Meanwhile, US spring wheat is rated 81% good/excellent with planting 97% complete. These lofty crop ratings correlate strongly with above trend yields, particularly for the high protein wheat. On the other hand, SRW ratings are low and yield prospects are likely to be weaker. Even with diminished export demand, SRW stocks will be their tightest since 2014, currently estimated at 45.5MMT. High protein stocks to use, however, sit at a whopping estimate of 67%, which would be the largest stock on hand since 1987.

The funds are now net long 2,000 contracts (CME) for the first time since September last year as it appears more and more likely that domestic feed usage will switch from corn to wheat in those areas where HRW is closer/easier to source compared to corn. US corn planting made strong progress over last week, increasing to 83% complete, still below last year and the 5-year average of 99%. SRW is currently trading at a significant premium to HRW, on both futures and in FOB markets. This is unusual as it would be similar to having APW/ASW at a premium to H1/H2. HRW is also holding only a 20c premium over corn, therefore, should the freight cost be higher for corn compared to wheat, we will likely see many feedlots switch to wheat in the US. In order to remain competitive in the export market, US prices are going to have to soften, otherwise, most importers will turn toward cheaper Black Sea/EU wheat. 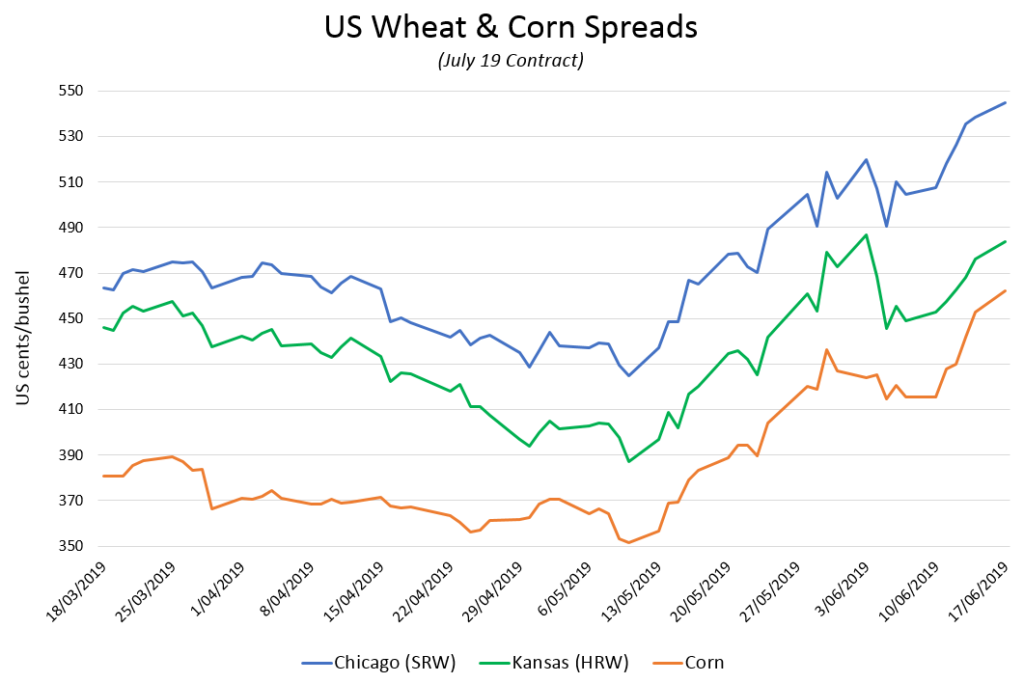 Rain throughout the EU and Black Sea has trended slightly drier of late, however, soil moisture levels have aided in keeping wheat crops on track for maturation and filling. Harvest is set to begin for winter wheat in the southern areas of Russia by July, whilst spring wheat planting is essentially complete and will be harvested in August. The current USDA forecast of 78MMT for Russian wheat includes 58.8MMT of winter wheat and 19.2MMT of spring wheat, planted on 26.5 million hectares. Yields are expected to be up around 8% on last year to an average of 2.94T/ha. EU wheat production remains unchanged at 153.8MMT, up 12% on last years crop and 2% higher than the 5 year average. In spite of recent price increases, the global scenario of strong NH production coupled with an increasingly uncompetitive US export market means we could see futures soften as they come under pressure in the near term in order to combat record global stocks.

The Rosario Grains Exchange in Argentina have pegged their 2019/20 crop at a record breaking 22MMT up from 19.5MMT last year. Consequently, this results in further export competition for the likes of Australia and the US, as last year, SE Asian importers began bringing in cheaper Argentine wheat. With SE Asia set to remain the largest import region for wheat in 2019/20, Australian market share may come under further pressure. 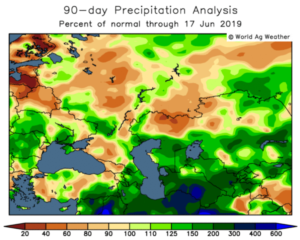 WA’s long awaited break of the season finally arrived with areas of the wheatbelt receiving anywhere between 10-50mm last week. This has helped to boost crop emergence and germination of those that were planted later. Total crop area is slightly lower this year in WA, with area sown to wheat down 11% compared to last year dropping to 4.28 million hectares.

ABARES have now reduced their Australian 19/20 wheat production estimate from 23.9MMT to 21.2MMT as northern NSW and southern QLD continue to suffer from low soil moisture and minimal rainfall. This drop places production approximately 14% below the current 10 year average and looks to help support prices domestically. Despite rainfall in WA, SA and most areas of VIC, the east coast feed and milling markets remain the powerhouse driver of our domestic grain prices. This was demonstrated last year as WA had a bumper crop, yet east coast drought continued to drive the market higher, even with enough supply from the west coast. Over the past 6 months, key growing areas of NSW have seen total rainfall reach 25-100mm for the year so far with the majority of this occurring in April. This sparked an initial round of sowing, however, the lack of follow up rain has left many growers with little confidence. The southern areas of the state are faring better than the north yet the BOM 3 month outlook is predicting that the weather will likely turn drier than average for the remainder of winter and spring.

New crop wheat has been fluctuating between $300-322 over the past fortnight, currently sitting at $310 Outer Harbour. Basis has softened significantly as futures have continued to rally, falling from their short term high of 84c/bu down to 28c/bu. Should the US futures markets begin to fall to remain competitive in the export market, it is likely basis will firm. Current conditions on the east coast are helping support local markets and will likely push prices slightly higher with little to no rain on the forecast for the short term.

Old crop wheat prices have held within a tight range ($315-$325 OH) whilst basis has once again dropped below 100c/bu to currently sit at 71c/bu. This has seen a little bit of support from renewed buying interest on the east coast, however, the rally has slowed in pace.

On the delivered front, northern east coast wheat markets have continued to find consistent demand for old crop from WA, with pricing remaining in line with import parity. Similarly, in Victoria demand has been steady yet grower selling has lost its liquidity with values pushing slightly higher last week, now anywhere between $370-$390. The SA delivered market remains very quiet as most end users have covered their short term requirements. Delivered upcountry wheat prices currently sit around $340-$350 with delivery periods for Jul-Sept. 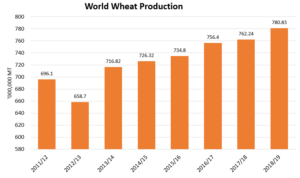