As we approach harvest, many growers are mentally prepping for task of harvesting and marketing the grain they have spent all year growing. Being human, we quite often don’t like being told that something we have put a lot of effort into, doesn’t meet the standards of others… Enter: Malt Barley. All too often, we expect our barley to go Malt only to get to the silos and being tested as feed. The disappointment is real, especially when there is a premium on the table which leaves us scratching our heads thinking, why? Why couldn’t they just bump me up to malt? I was only 1% out of spec? Well, particularly for barley, each specification has a very real reason for being set at the level that it is and if you like drinking beer, you better listen up! Consistency is key when it comes to barley as large maltsters have quite a job to do when ensuring the malt they provide to brewers like Coopers, West End, XXXX etc. meet the standards they require to keep your beer consistent, and ultimately, you (the consumer) happy.

Last month, Mikaela attended the 2019 Innovation Generation conference in Ballarat, where she undertook a tour of an artisan malt house which specialises in the old school technique of small batch floor malting. The House of Malt aims to create a versatile and unique malt product to allow small brewers and distillers the opportunity to broaden their options and diversify their product. Whilst on the tour, Mikaela learnt some great insights in regard to the malt industry and in particular, how the process relates back to the barley used. Keep reading to find out why meeting specifications is so important when you deliver your barley to the local silos this harvest and how to growth of small craft maltsters is providing growers with greater marketing options for their malt.

Let’s start with how we turn raw barley into malt. Each step is followed by both large and small malting companies alike, however, the actual processes may change slightly.

Important Specification: Protein
Protein content can alter absorption rate, particularly with high protein barley, the whole process is slowed right down. For large malting companies who are running on a tight schedule, this can end up changing the outcome of a whole batch. For craft maltsters, they generally have a flexible timeline which can allow them to take slightly out of spec protein in barley as they can monitor and test moisture during steeping over a longer or shorter period of time if need be. Protein can also change the flavours of the end result, but these two reason are why protein specs are set between 9-12% for malt in the system.

2. Germination.
This can be done a number of ways, but it involves moving the batches into a confined space and increasing temperature to ensure optimal germination conditions are met. The malt tour that Mikaela went on, used old school floor malting techniques. The barley was laid out in a 2 inch pile across the floor of an old cool room which was then sealed and kept at a consistent 20 degrees (18 degrees on the floor). By increasing moisture content in step 1, and maintaining min. 18 degrees within step 2, we have optimal conditions for uniform germination. Germination can take 2-5 days dependent on variety, seed size etc. Once the seed had sprouted, it is time for step 3. 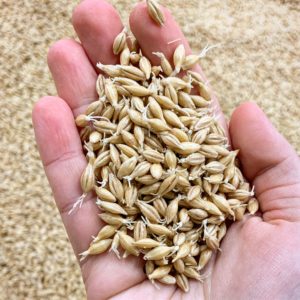 Sprouted Barley During the Germination Step

Important Specification: Retention/Test Weight
Retention definitely has the ability to make or break malt specs, and it is extremely important for maltsters to know that by having uniform seed size, their germination rate will be similar. Again, large maltsters have time constraints, hence why they want to know that all their barley will germinate at around the same time. Some of the smaller craft maltsters have spare time to be able to play with small seed size, however, regardless of the overall size, it is still important that it is uniform across the batch.

3. Kilning.
Kilning is where the grain is again dried out, halting the germination process. This is truly where beer magic happens! During kilning the germinated barley is heated up to dry it out and create that malt/biscuit like flavour. The kilning method and time can vary widely, this is where craft maltsters play around with flavours for the brewer. For example, a pale ale malt is only gently dried at a low heat to preserve the integrity of the enzymes. Various techniques change the end result, is can be roasted heavily for a “chocolate malt” used in darker stouts, or it can be heated less so for an amber ale. Some barley is crystalized for a sweeter beer and some can even be smoked!
Important Specification: No particular one for this step, however, all the specifications do play into the end result. 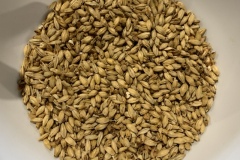 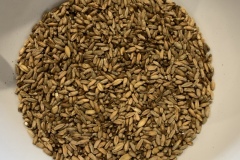 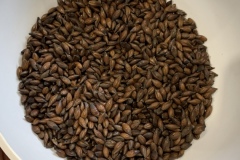 The tour that Mikaela attended involved tasting each of the malted barleys which could be described as the flavour of biscuits (pale ale), burnt toast (chocolate/burnt malt), toffee (crystallized malt) or even smoked cheese (smoked malt)! The tour concluded with a beer tasting to demonstrate how the malt flavour translated into each of the corresponding beers. The tour was invaluable to see how the specifications play into the larger malt market but how the growth of the small craft maltsters is really changing the game for guys with off spec malt barley. Whilst large malting companies are seeking specific “flavour of the year” malt varieties, small artesian maltsters have tapping into some older varieties of barley that allow for distinct flavour to come through in the beer. It was said that a true craft brewers, will barely need to use any hops to bring about the flavour if they can use the right malt to achieve their desired end result. Both the House of Malt in Ballarat and the accompanying maltster, Stu Whyte from Barellan Beer, have both contracted hectares from growers in their local regions, and are even paying growers a premium to grow old school varieties like schooner, so they can mix and blend different malts to suit their brewing companies’ unique tastes. 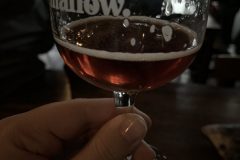 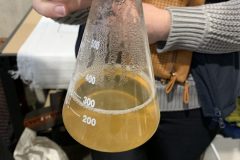 2.Sweet liquid called “wort”, this comes directly from hot water that has been filtered through malted barley.