US SRW wheat has surged higher over the last couple of weeks, rallying circa 60 c/bu from recent lows. The Price has pushed through resistance at 720c/bu and is now taking aim at the previous season high of 770c/bu.  The market is pushing higher following mounting concerns over US, Canadian and Russian wheat production. The medium-term trend remains bullish as major exporter stocks are expected to tighten further and may reach record lows. It is important to note that despite sizable reductions in global wheat production, the market seems reluctant in its march higher as large US corn production estimates from the USDA and lacking evidence of strong demand is keeping the wheat bulls in check. The market is expecting continued strong demand, especially out of China. However, despite earlier strength, recent exports have been underwhelming. We expect this to be temporary, and we are starting to see major importers re-enter the market to cover their forward commitments.

Russia – Early yield estimates and a recent update to planted area have brought some forecasters back to reality. Generally, Russian winter wheat area is under-estimated, however, this year it looks as though it’s the opposite. Russia’s Federal Statistics Service recently reported Russian winter wheat planted area at 15.6 million hectares, which is well below the market expectation of 16.8 million hectares and down 6.2% from the previous year of 16.63 million hectares. Subsequently, SovEcon has revised their production estimates down a massive 5.9MMT from 82.3MMT to 76.4MMT. 4MMT of which is due to the smaller area and 1.9MMT due to unfriendly hot/dry weather at the tail end of the winter wheat season and soil moisture deficits across some spring wheat regions. Other private forecasts expect realistic production of around 76MMT, while the IGC and the USDA are at 81MMT and 85MMT respectively.

Russian Spring wheat regions received some decent rainfall over the past two-weeks, which helped to restore some soil moisture. However, current deficits; especially in the Volga region (27% of spring wheat) remain large and follow up falls are needed. We could be seeing hotter temperatures move into the spring wheat regions over the next two weeks, with warmer than average temps forecast over all major regions. The already struggling Volga region could see temps on the high 30s (°C) side. There is potential that extra area may be found across spring wheat regions, however, with current soil deficits, it will unlikely be enough to account for the overzealous estimate from the USDA.

Middle East Iranian wheat producing areas have been inhibited by limited rainfall and above average temperatures during their growing season which has led to prolonged periods of low to very low soil moisture. Generally, Iran only imports around 2MMT, however as they have been in drought; CloudBreak believes that the USDA have Iranian production and imports understated by 5-7 MMTs. As a result, increased imports from Iran could help to further tighten Russian wheat stocks, or off-set improved production form the EU.

EU – All-in-all, a delayed but above-average wheat harvest is expected in almost all EU wheat producing countries. The typical July heat wave that usually hinders grain filling has been mostly absent. The Mars report forecasts total wheat yield across the EU to be 6.3% above the 5-year average at 5.82T/ha. In the latest update from the USDA, they have raised their EU production forecast by 200kMT to 138.4MMT, which is 9.5% higher than the same time last year. There are still respected private forecasts at around 133MMT, however, CloudBreak believes 135MMT is looking more likely. As mentioned in our previous Outlook, plentiful rainfall has boosted production estimates, however, it has also been creating mounting concerns over quality. France, which produces around 24% of EU wheat has experienced excessive rainfall and stormy weather and theirwheat crop quality is expected to suffer. Germany, which accounts for around 15%, is expected to have missed some of the heavy rain although quality is still being assessed. Overall, protein will likely be harder to come by out of the EU this year.

US – US Spring wheat crop conditions remain at near record lows of only 10% Good/Excellent (Gd/Ex). Marginal rainfall over the past 2-weeks has helped slightly, boosting crop conditions by 1% point from lasts weeks dismal 9% Gd/Ex. However, the majority had quickly evaporated as day-time temperatures consistently reached high 30s (°C). The forecast across major US spring wheat regions remains hot/dry, which will only help in facilitating an uninterrupted harvest, which is now underway. The latest crop tour across the US Dakotas found wheat yields of 1.96T/ha, which is well below the 5-year average of 2.91T/ha. As a result, US spring wheat production is estimated to be 35-40% lower y/y; and as the tour often over-estimates North Dakota yields, the actual production decline could be closer to 40-43% lower y/y. 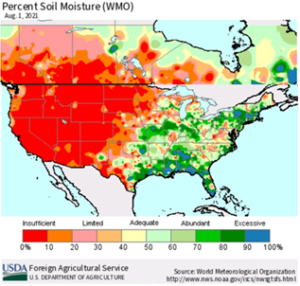 Canada – Similarly to US spring wheat, Canadian spring wheat crop conditions across Saskatchewan have also met deteriorating quality, recently reported at 16% Gd/Ex; down 9% from the previous two weeks. Approx. 75% of Canadian wheat is spring wheat, and around 41% of Canadian spring wheat is grown in Saskatchewan. Alberta also grows a large amount of Canadian spring wheat (37%) and has also not been able to escape the heat/dryness. In a year such as this, it can be compared to the drought seen in 1988. However, with improvements in farming practices, we don’t expect yields to be comparable. CloudBreak estimates total wheat yields of 2.48T/ha, which would bring production to as low as 23.53MM, 33% lower than the previous year of 35.15MMT. Other private estimates forecast the Canadian wheat crop even lower at 23.19MMT.

Australia – As expected for a while now, we could be in for another big year, and production forecasts continue to rise. The USDA has increased their 2122 estimate for the Aussie wheat crop from 28.5MMT to 29.5MMT and with beneficial rainfall over July, it may be raised further. In our last report CloudBreak indicated our estimate of a 30MMT wheat crop, which is looking more likely as the season progresses. WA could be on track for a record winter crop harvest as solid rainfall consolidates the excellent start to the season. WA produced 10.6MMT in 2016, and with the extra 14% area planted this year, an 11MMT crop isn’t out of the question. SA and the eastern states have also had widely beneficial rainfall. A negative IOD has been confirmed, which will likely benefit WA and SA at the tail end of winter and into spring. La Niña has not been confirmed, however is looking more likely.

Argentina – Argentina’s wheat forecasts are pegged at 20.8MMT – a record high and 300,000MT above the July WASDE. Whilst Argentina has been receiving adequate winter rains, this forecast may also seem top heavy with many national weather forecasters tipping another La Nina event to arise come Sept, if this eventuates this will likely mean hotter and dryer spring adversely affecting winter cereals. 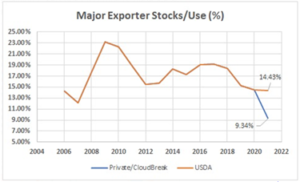 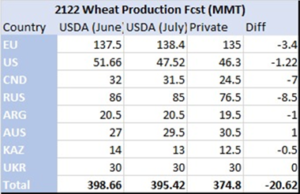 Consumption –The USDA has forecast record global wheat consumption for this season. A part of this will be ongoing strong Chinese feed grain demand. This year is panning out to very interesting as the USDA consumption forecast may not be possible as we suspect that the USDA has global production too high by 16 to 20MMT. We have already seen private forecasters reduce Russian production by 6MMT and the Canadian/ US drought will also see lower numbers. As a result, the major top 8 exporters could see their ‘Stocks to Use” fall below the previous record circa 12%. If this scenario plays out, demand will need to be rationed by higher prices. Nth Hemisphere FOB prices are on the move higher post the Nth Hemi Harvest. This was highlighted in the latest Egyptian Tender where there were limited sellers. Egypt paid an average fob price of $261 per ton for one cargo of Romanian origin this was $14 higher. It is expected that importers will continue to scramble for coverage.

With a large Aussie crop brewing and currently priced at a very weak basis (minus 90c/bu), we would expect to see strong demand for our product. Basis is currently extremely weak due to our falling currency, 30MMT plus local crop compared to elevated US futures and tight global ending stocks. We have a growing freight advantage (see Below) and as a result we expect to gain market share in our back yard export markets of SE Asia.