The past fortnight has seen South Australian wheat come under pressure amid ongoing coronavirus fears and continued grower selling. APW1 at Outer Harbour is down $17/MT for February, currently trading at $338/MT. The story has been similar across the other major zones, with Port Lincoln, Wallaroo and Port Giles all down between $12/MT and $20/MT since mid-February.

Markets all over the world have been dominated recently by the coronavirus epidemic, with the South Australian wheat market being no exception. While the total impact of the virus is not yet known, it is providing a whole lot of uncertainty, particularly around the impact on demand from countries such as China. The one thing markets do not like is uncertainty and as such, local wheat values have been softening. With the increasing uncertainty putting the pressure on markets, growers have also made another round of sales in an attempt to mitigate their exposure and take advantage of prices given they are still trading above where they were in December. The result of this selling has been that further pressure has been placed on the market.

While there has been some short-term pain, the market is walking a fine line between tight old crop stocks and a competitive AUD. The question now becomes how much more pressure is going to come onto the market and will prices rebound once the outcome of the epidemic is known. Currently basis on Outer Harbour APW1 is 75c/bu, relatively weak and not reflective of the current situation in the market. That situation is that South Australian growers are particularly well sold on wheat, on average approximately 91%. It looks as though end users are also lacking coverage beyond April and should have relatively consistent demand throughout the remainder of the year. This unfolding market of tight stocks and continuing end user demand should provide some level of support to the market, meaning there is the potential for basis to firm up later in the year. However, we remain weary that even if basis does firm up, the final cash price can still be lower than it is currently if the international market continues to move weaken. 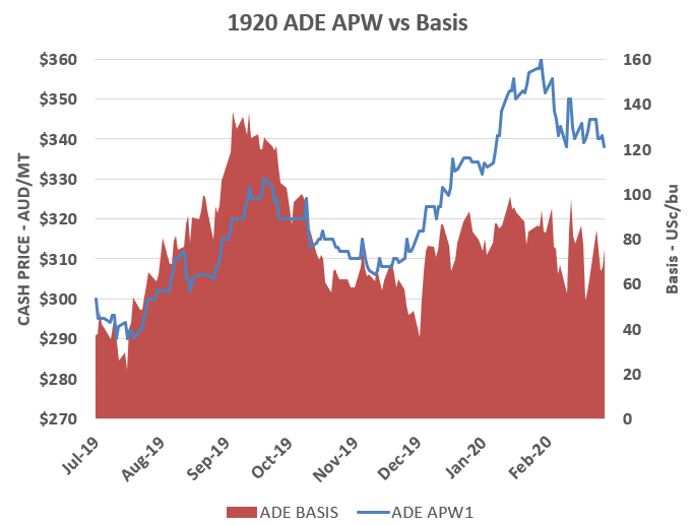 Export Parity– While the local wheat market has been softening, it means that South Australian wheat has been approaching export parity levels. At the current price, wheat from Outer Harbour and Port Lincoln is essentially sitting on export parity. This should theoretically provide some support in the short term, however we need to consider the fact that traders will also need to take a margin and consequently values may fall away another $5/MT – $10/MT before our grain is profitable on the export market. We also need to consider that this export parity figure is dependant on what the international price is doing, and therefore is a moving target. If the international market was to fall away, the export parity level would also fall, meaning that our cash prices would be required to soften in order to remain competitive on the international market, something that is currently a very real risk. The same can be said for the AUD and if it were to rise, this would see the export parity figure weaken further. 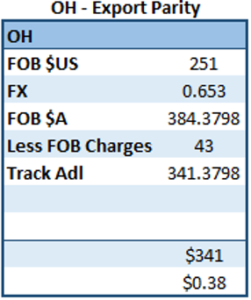 International– Global wheat markets have continued to soften over the past fortnight amid the coronavirus fears and a relatively healthy-looking northern hemisphere crop. Rainfall across Europe has meant vegetation health is good, while recent rainfall across Russia’s southern region has improved conditions there. While official forecasts are yet to be released, some early analyst forecasts have been coming in as high at 87MMT! The milder winter through Russia has meant the crop is more developed for this time of year. Typically, milder winters will boost production and the overall exportable surplus. While 87MMT would be a record Russian wheat crop, it is worth mentioning there is a lot of water to go under the bridge between now and harvest.

The impact of the mild weather and consistent rainfall across the northern hemisphere has been reflected in global cash prices. Global FOB prices have been softening with Russian whet values currently sitting at FOB US$217/MT, down from its peak of around $235/MT. Recent wheat tender results have also reflected the softer market. Tunisia last week purchased 125kMT of wheat at an average C&F price of US$233/MT, $13/MT below their previous purchase. Jordan also purchased 60kMT last week at US$5/MT below their previous purchase. The US wheat futures market has also been coming under pressure. After peaking at $600/MT, the SRW December contract is currently trading at 540c/bu and is technically in a downward trend. Currently the market is finding some technical support around the 540c/bu level. 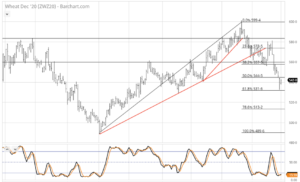