Grain Snippets: Wheat Walks to the Beat of the US-China Drum

Grain Snippets: Wheat Walks to the Beat of the US-China Drum

Over the past fortnight, wheat (cash, futures and delivered prices) escaped the seasonal holiday slump with prices maintaining their steady to slightly stronger tone, particularly within the delivered markets. It appears that with limited trading activity over the past month, a few end users are playing catch up and prices are beginning to reflect their need for wheat. As we move into the beginning of January, we are awaiting the first WASDE of 2020, with expectations that US planted area will be lower alongside the first forecasts for 20/21 wheat production. Overall, the global sentiment has been helping maintain wheat prices locally, which are also buoyed by ongoing drought conditions on the east coast with little to no rain in sight for the coming weeks.

Global Wheat – US wheat has been supported of late by positive US-China trade news with the announcement that ‘Phase One’ of the trade deal will be signed on the 15th of January. Traders expect that once the deal is signed, there may be increased buying of US wheat by China, along with other ag goods. This news saw wheat rally 11c/bu over the Christmas break, however, Friday’s session ended 6c/bu lower following rounds of profit taking after the US military killed a high ranking Iranian army general. Overall, US futures have seen a relatively consistent uptrend since August, rallying from lows of 459c/bu (August 2019), to 560c/bu (Thursday last week). The upcoming WASDE, or confirmation of what the US-China trade deal will consist of may see the markets move quickly in either direction.

Moving to South America, Argentina’s wheat harvest is 92% complete with none of the crop rated in good or excellent condition. The Buenos Aires Grains Exchange has lowered their production forecast once again, now at 18.5MMT (down 3% on last year). This remains positive for Australian prices, particularly with the newly increased export tax on Argentinian wheat. The Argentinian government also reported that the export tax hike, previously 7% now 12%, has had a significant impact on export licence applications, which skyrocketed prior to the change.

Conditions across the EU have been mixed for the newly planted winter wheat crop with the majority of southern Russia and parts of the Ukraine experiencing dry conditions. The remainder of Europe looks to be receiving average-slightly above average rainfall, except for some parts of central Europe which have seen only 60-80% of normal precipitation. French wheat area was expected to be significantly lower after excessive rain delayed fieldwork, however recent reports have it down 5% year on year. The dry weather has caused concern for crop emergence/establishment in the Black Sea which is crucial prior to winter dormancy. Russian FOB prices have lifted over the past week, now at US$213/MT, after the Ag Minister was quoted saying that Russia is looking for new ways to restrict grain exports if need be, but only under “certain conditions”. 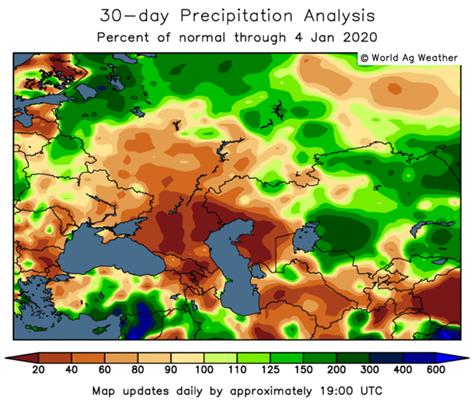 East Coast Outlook – Harvest is beginning to wrap up with very little area left to be reaped across VIC and southern SA/WA. Conditions remain hot and dry across most of the country with some models showing rain over the next 2 weeks as a tropical low forms off the NW coast of WA. Optimism regarding this rain remains limited with most expecting it won’t bring enough to change any longer term outlooks.

Wheat prices onto the Darling Downs remain steady at $445/MT. With no sorghum crop in sight this season, SOR1 is currently at a $15 premium to wheat (which is basically unheard of) and a $73 premium to barley! We expect that many end users will increase their use of wheat/barley in place of sorghum, however, the total amount of domestic consumption of sorghum in Australia each year is minimal compared to that of wheat or barley.
Riverina bids have edged higher now sitting above $380/MT whilst VIC end users have been bidding closer to $360/MT. It appears that trade activity was quite slow over the Christmas/New Year break, but shorts in these feed markets kept prices aloft.

SA System Pricing – Outer Harbour AWP1 pricing has lifted $16/MT since the beginning of December but for the last fortnight it has remained rangebound between $332-$335/MT. Over the same time frame, Wallaroo and Port Lincoln bids have lifted $18-$20/MT, reflecting the increase demand for shipping in these zones. All SA ports have at least 1 wheat boat on the stem for the coming month with Lincoln seeing the majority of shipping demand. Basis in the Outer Harbour zone has risen from its lows of 36c/bu in early December to currently sit between 75-80c/bu, this reflects the domestic fundamentals behind our current prices. 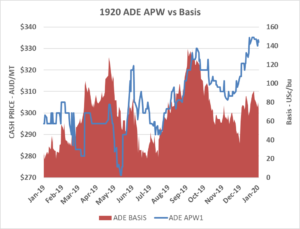 Site premiums have remained intact for the mid north, south east and Mallee regions (OH Zone), however those sites that are in export zones (Lincoln, Giles) have seen the premiums dissipate as shipping demand has lifted prices at the port. We expect that port prices at Lincoln, Giles, Wallaroo and Thevenard will remain higher than site bids (aside from a few key sites) as shipments to the east coast look to continue in 2020. It is also likely that we may see some international shipments to fulfil inelastic demand e.g. wheat from Port Lincoln to Yemen (Dec 2019), however, with limited exportable surplus, the east coast is likely to have the stronger pull. Mid north, SE and Mallee rail sites are also expected to hold their premium over the port price as trains continue to depart for railheads at Narrabri and Moree in northern NSW.

SA Delivered Pricing – Delivered bids have lifted over the break with shorts prompting end users and accumulators alike, to increase prices. Delivered Murray Bridge/Mid North numbers sit between $345-$350/MT with many looking for prompt delivery. It is expected that several end users will be caught short throughout the remainder of the year, particularly as delivered prices at harvest were not competitive enough against site prices, which ultimately drew a lot of tonnes into the system that may have been stored on farm. With a tight year, the amount of on farm stock is limited and demand from the east coast means local end users will need to be competitive to draw tonnes from growers’ tight fists.