Wheat markets have remained under pressure with the looming harvest in the Northern Hemisphere (NH) expected to provide ample supply at the global level. US wheat futures have weakened significantly over the last fortnight, now sitting at 493USc/bu just above long-term support of 490USc/bu. The potential for improved yields out of key winter wheat growing regions in Russia, as well as in parts of the EU have weighed on wheat markets. Domestic Aussie wheat markets have remained high for old crop; the low remaining supply has kept domestic prices well above world prices. However, with the export program winding down for Australia, grain held by the trade is now more likely to hit domestic markets and pressure delivered prices. Meanwhile, new crop bids in SA are sitting between $280-$290/MT, slightly weaker amid the NH pressures.

Production forecasts – Locally, production estimates for Australian wheat have improved further, with most forecasts (including the USDA) putting the 20/21 wheat crop at approximately 26MMT, up 41% YoY. With most regions experiencing favourable conditions throughout autumn, optimism for the season is high. With the increase to production, the USDA has also increased their estimate for Australian exports, up 40% on last year to a total of 16MMT. The recent WASDE report also increased total global wheat production by 4.94MMT despite slight decreases in Europe due to dry weather. Alongside this, global consumption was reduced slightly, leading to a record large ending stocks figure of 316MMT. Keep in mind, most of these stocks are held by China and India (non-exporters) and therefore, the ending stocks figure amongst major exporters increased only modestly. 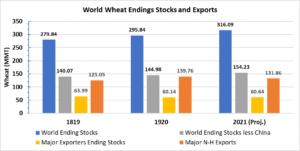 Concerns over the winter wheat crops in the EU and Black Sea have mostly been alleviated due to late May/early June rainfall. The late-season rains provided growers with last ditch hopes of average yields and improved production estimates. For 2020/21, the EU is still facing reduced wheat production (down 8%) and exports (down 23%) but most of this had previously been factored into new crop prices. The recent rains have simply added pressure to the market. The Black Sea had also been hampered by dry, warm weather; however, recent local reports have eluded to the fact that soil moisture is still high enough for decent production. There are some market expectations that the USDA may revise their estimate higher, from 77MMT to 80-82MMT by July. 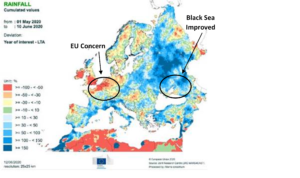 Russian Exports – In March, Russia set a quota on its grain exports as stocks tightened amid pandemic concerns. The quota was hit and for the second time in history, Russia banned grain exports. The ban ends when the new marketing season starts on 1 July 2020. Export restrictions lead to market instability and increased price volatility. If further export restrictions are announced for new crop supplies, prices are likely to increase and may provide an opportunity for Australian exports. Russia recently announced it will not extend export restrictions between Jul-Dec this year, but it will look to put some restrictions in place between Jan-Jun 2021. This means that we could see Russian traders front-end their export program like we saw in 2018. If this occurs, we could see cheap Russian wheat flood the world market adding further pressure to pricing.

US Crops – Early harvest pressure in the US has also been contributing to the pressure on prices. Most southern states have begun, with many in full swing. The US wheat crop is currently 15% harvested with progress moving north at an average pace. The weakened US dollar was providing an underlying level of support for wheat values; however, the USD has lifted over the past week as political tensions in the US ease slightly. Anticipation of a record large US corn crop is building, with production currently estimated at 406.3MMT (up 14% YoY). This is of particular concern for wheat prices with large corn ending stocks also forecast due to reduced demand for ethanol production (consequence of COVID-19). The increase in corn stocks has the potential to drag on wheat prices, and seasonally, we can expect this to occur in Oct/Nov as excess cheap corn will provide competition for wheat feed demand.

Australia has generally had a good start to the season, with the south-east Australian cropping region receiving above-average rainfall and prompting a large increase in planted area compared to the last couple drought years. In contrast, average rainfall was recorded across cropping regions in WA and QLD in March, followed by below average rainfall in April and patchy rainfall in May. Parts of the southern cropping region of WA received sufficient rains to start the season, but most of these areas will rely on winter rainfall to see it through. In SA, northern cropping regions have had patchy rains and despite a few wetter weekends for the rest of the state, these regions have remained relatively dry. Looking ahead, the BoM forecasts a 75% chance of receiving between 50-100mm of rainfall in most Australian cropping regions between Jun-Aug. This should be enough to sustain most crops through to spring, but there are certainly those areas that need it sooner rather than later. 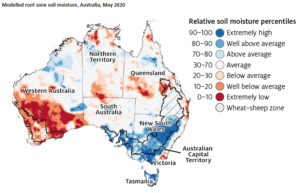 $AUD – The Aussie has been a dominant factor on 2020/21 wheat prices, with the plunge in March causing a spike in bids. At the same time, we saw panic buying amid coronavirus concerns and fears of global restrictions. Since then, we have seen both of these factors unwind, with the Aussie’s recovery continuing to pressure markets. We have seen the Aussie test the 70c mark, and fail, multiple times in recent weeks but it seems to be able to hold a medium-term up-trend. Due to its significance, we are watching this carefully, as if it happens to break down then it would be a prime opportunity to advance new crop sales.