Tariff changes – over the past fortnight, India reduced their basic import duty on lentils for all origins from 30% to 10%, with an exception to the US which saw a decrease from 50% to 30%. The change is temporary (at this stage) and is due to revert to prior levels after the 31st of August 2020. The tariff relief has been prompted by short-term domestic demand increases coupled with supply-chain problems and food price inflation. Agricultural production in India has had difficulties keeping pace with the growing demand and consequently, there has been a high rate of food price inflation. Average domestic spot prices (for May) are reported almost 24% higher compared to the same time last year, and household consumption is higher due to COVID-19. These prices are nearly 17.5% over the Government’s minimum support prices, so the tariff changes have been made to help push domestic prices lower via increased imports. Traders seeking to take advantage of the tariff change will need to get shipments sorted before the end of July, so that the lentils reach India before the end of August.

India has faced a multitude of challenges over the last few months with COVID-19, which has ultimately benefited lentil prices in Australia. Like most countries, India has been in lockdown due to COVID-19 with restrictions easing as of Monday. The pandemic and subsequent restrictions coincided with Rabi harvest in India (and surrounding countries) which was already delayed by due to heavy rain and storms. The storm reportedly caused some damage to crops, but India’s Ministry of Agriculture is still reporting a 17% increase in their Rabi lentil production (1.44 MMT) compared to last year. That said, many traders believe this official estimate has been greatly inflated. Reporting from the Indian subcontinent (and other regions) during these last few months has been considered less-than-accurate due to distancing measures. Additionally, the prompt demand on lentils for the region indicate that final crop estimates are less than what’s currently being reported.

Growers in India have faced difficulties with labour and machinery access during harvest and continue to face issues with getting their grain to markets and warehouses. In combination with logistical issues at ports, India has faced some hefty food-security issues at several points in the supply chain. According to local reports, cargo volumes processed in India’s various state-owned ports fell 18-44% in April-May compared to last year. Notably, India is still making efforts to supply its poorer population with additional pulses as part of a welfare program during the pandemic, keeping demand elevated.

Locust swarms – Post-Rabi harvest, growers are left with more grain on farm than normal which could pose a new problem, locusts. Huge swarms of desert locusts are destroying crops in multiple states, devastating many growers already struggling with the previous impacts of COVID-19. Although they are not new, this is the worst locust attack to hit India in 27 years. Markets are closely monitoring current locust infestations in Pakistan and India. While the Rabi season harvest was mostly complete, the attack could have further devastating impacts on summer crops or grain left uncovered on-farm. Kharif planting is belated due to the delays with the Rabi harvest, and many are still waiting for initial monsoon rains/easing of locust swarms. The FAO note that the worst is yet to come, with several succussive waves of invasions expected in July. Under those circumstances, early seeded Kharif season crops could be at risk as they emerge. The reality is that since most of India’s pulses come from the Rabi crop, there’s little risk to pulse supplies. However, it ultimately comes down to how India and its neighbouring countries view overall food security which may lead to broad support. 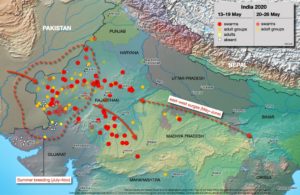 Price Impacts – Amid the various issues plaguing the subcontinent, Aussie lentil prices have been able to reap the benefits. Since most of the recent changes have been put in place to ease short-term demand pressures, the price impacts have been stronger for old-crop lentils rather than new. Aussie growers have been tidying up old-crop sales at these high levels but there are limited tonnes left in grower hands. Most remaining lentil tonnes were sold during rallies seen when the Aussie dollar was lower, ahead of seeding. Now, there is extremely low grower liquidity in the market which is providing further price support. The market sentiment has benefitted new-crop pricing, albeit to a lesser extent.

2020 Prospects – New season lentils have been overshadowed by the prospect of higher production in Australia and Canada. Whilst StatsCan have officially published lower lentil planted area for 2020, traders and other market analysts say otherwise. StatsCan cut off its phone surveying early due to COVID-19 work restrictions, therefore, the survey has not captured growers latest planting intentions, particularly with the recent hike in lentil bids. Expectations are that the real number for planted area to lentils in Canada is up 4-8%. If yields are average, this puts Canadian lentil production at around 2.3MMT, a 6% increase on last year. We should see a revised forecast later this month which will guide price direction. For now, we note that planting has been progressing ahead of average but there are some areas of low soil-moisture in key pulse-producing regions of Saskatchewan. 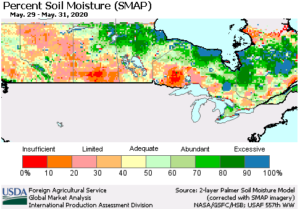 Aussie planted area to lentils is expected to increase around 15-20% as growers shift away from other pulse crops such as chickpeas. For some Aussie growers, high old-crop lentil values in the months leading up to seeding will have played a role in planted area. In addition, with a wetter year forecast for Australia, growers are hopeful for decent yields compared to the frost-impacted crops of the last two seasons.

The potential variation in yields this season will have a much stronger impact on prices due to the large increase in planted area. Based on average yields, we forecast SA and VIC combined could produce around 436,000MT of lentils for the season. However, if we see yields as strong as what we observed in 2016/17 then this number could easily reach 700,000MT. This may present us with a bumper crop if the weather outlook eventuates, however, it could mean price pressure if we have an abundance of lentils. For perspective, this is comparatively small against Canada’s crop potential of 2.2-2.4MMT (their 2016/17 lentil crop got as high as 3.19MMT), yet it will certainly influence price direction. So far, it looks as though the world balance sheet is tight enough to keep the market in check, so as not to burden prices prematurely.

Lentil stocks in Canada and Australia are extremely low for the end of the 2019/20 season, and until Canadian new crop hits the market (in September), limited available stock will keep traders on edge. Without an expansion in area, Canada’s stocks-to-use for 2020/21 would be as low as 2%, something not seen since 2015/16. The estimated increases to planted area and yields for 2020/21 may slow the year-on-year decline in stocks, but despite increased production, global ending stocks are still forecast lower. On paper, Australia’s ending stocks are effectively zero, and we can certainly attest that reported on-farm stocks are slim-to-none. Although there are still growers out there holding onto some lentils, it’s fair to say that the balance sheet is incredibly tight. India, despite its recent harvest, is also facing lower stocks-to-use as consumption increases and the government dips into its buffer stock to support the changes to their welfare scheme.

The $Aud has been able to claw its way back to the 70 cent mark, a level not seen since the start of the new year. Despite the official recognition of a recession, the Aussie has found momentum on the back of improved iron ore prices and declines in coronavirus infection rates nation-wide. Looking forward, the main catalysts for a fall in the $Aud would be any souring relations with China or any broad-based recovery in the USD.

In relative terms, Australia is performing much better than other countries in its handling of the coronavirus, including the Indian subcontinent. The $Aud has recovered 5% against the Indian Rupee since the start of June, and a huge 28% from its low in March. We must be mindful that even if the $Aud falls back against the USD, it’s still likely to be higher against the Rupee. As such, local pricing on pulses may be capped by the relative value of the $Aud.