Local Cash Prices – Barley has continued the march upwards over the past fortnight for both old and new crop. Outer Harbour values for the 1920 season are currently sitting at $290/MT, Port Lincoln $280/MT, Port Giles $270/MT, whilst Wallaroo is sitting at $267/MT. In the same period, we’ve seen 2021 season BAR1 MG prices jump as much as $45/MT depending on the port zone. Premiums are no longer being offered at sites in the Mallee, South East and Mid North as the focus has turned exports rather than domestic demand. The spread between wheat and barley has increased significantly to now sit at $100/MT for 1920 season and $65/MT for 2021 season. Barley values for 1920 season currently sit at a decile 9.06 for Outer Harbour and 9.32 for Port Lincoln. 2021 season decile sits at 8.53 for Outer Harbour and 8.24 for Port Lincoln.

Coronavirus – Coronavirus continues to dominate all global financial and commodity markets, with extreme volatility and a risk averse attitude settling in. Coronavirus cases now sit well above 700,000 worldwide, with many countries now in lockdown. As a result of the extreme volatility and impact on the global economy we’ve seen the AUD continue to tumble to lows unseen in 17 years over the last fortnight. On March 19, we saw the AUD dip to 0.55908c. However, since last Thursday we have seen a modest recovery in the AUD as numerous global efforts from governments providing stimulus packages and banks lowering interest rates have helped to stabilise financial and commodity markets somewhat.

AUD – Growers have taken advantage of the higher local cash market prices due to the lower AUD. Growers now sit at roughly 93% sold on 1920 season tonnes, and we’ve seen some increased interest in new crop selling. Stocks remain tight and continue to tighten on both barley and wheat. We’ve seen the Outer Harbour BAR1/Corn basis for 2019/20 strengthen to 99.18USc/Bu, which is still down from the highs we saw in January of 129.31USc/Bu. We expect to see volatility remain around the AUD for the coming weeks as Coronavirus spread continues to cause havoc on all markets and will continue to for some time.

Over the last fortnight we’ve seen the ethanol industry take a significant dive due to the Coronavirus pandemic resulting in travel restrictions globally. Less travel worldwide results in a reduced demand. We’ve seen US ethanol plants slash their ethanol production in the last couple of weeks. A reduction in ethanol-based fuel consumption means there will be a reduction in corn consumption, with crush margins entering negative territory. As a result, we’ve seen corn futures plummet, even China re-entering the corn market didn’t provide any support. Brent Crude oil was at US$68.91/barrel on January 6, compared to today where it sits at US$26.81/barrel. China have purchased 756,000MT of US corn which will need to be delivered prior to end of June 2020, this is the biggest purchase from China since July 2013. With a reduction in corn consumption we’ll see an increase in ending stocks. This could potentially put pressure on barley values due to the increased stock in the feed markets globally.

Tight Stocks – We’ve seen end users increase their pricing for barley into domestic homes as a result of this price rally to secure what limited tonnes remain available for purchase. We’ve seen prices lift by $20-$25/MT in the last fortnight (delivered Mid North) to now sit around $310-$315/MT. With the spread between wheat and barley getting larger we could see more end users turn to barley as a cheaper alternative in rations. The market has basically moved into a buy and hold mentality as there are so many uncertainties around shipping capacity/restrictions which may be put in place by various countries as a result of Coronavirus. The rumoured renewed export business from China and Thailand for Australian barley hasn’t yet been confirmed. There haven’t been any new ships show up on the shipping stem, although the shipping stem currently only shows out until the end of April. There is the possibility that ships have been booked out into May/June/July and buyers are accumulating for these.

BOM Update – The Bureau of Meteorology has released the outlook for April to June with above average rainfall predicted for much of SA and WA for the period. The outlook for Queensland/ Northern NSW where they have observed numerous years of drought may once again see drier than average rainfall. Daytime and night-time temperature for the April to June period are expected to be warmer than average. The ENSO and IOD remain at neutral and are expected remain neutral for all of winter.

Australian Sorghum – Sorghum values have also firmed significantly in the last fortnight to $420/MT, up $40/MT from our last report. With such a significant spike in sorghum values, and to a lesser extent barely, we seen a premium remerge for barley out of South Australia to the East Coast. It is currently an option to take barley via sea out of Outer Harbour, Port Lincoln and Port Pirie to the East Coast. However, it will be hard to secure tonnes in the Mid North area with growers already heavily sold. Australia’s summer sorghum crop is predicted to be the lowest output since 1969/70 harvest. A total production of 450,000MT is estimated even after consistent rainfall over the last month has increased yield potential. The low sorghum production in Australia this year could create more opportunities for barley into end users as they look for a feed alternative to cover their requirements. This could create potential for increased barley pricing later in the year. 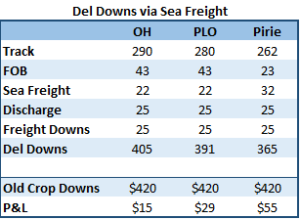 Export parity – South Australia barley out of both Outer Harbour & Port Lincoln currently sitting slightly below export parity. However, as always with the ever-changing market we’re currently in the export parity figure is a continually changing target.  If we see a softer tone in international values then local values will need to follow suit to remain competitive on the export market. If we compare the profit margins for barley into the east coast vs exporting, currently there is a larger margin into the east coast. However, this will largely be driven by demand into the east coast prior to new crop being stripped. Over the last fortnight it has been quiet on barley tenders. We’ve seen Saudi Arabia book a massive 1.2MMT of barley in a tender at an average of $201/MT all for May/June shipment. 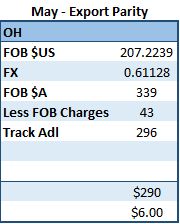