Grain Snippets: China Leaves Canada Out in the Cold

Grain Snippets: China Leaves Canada Out in the Cold

Local canola prices have remained firm at $590/MT Outer Harbour and Port Lincoln, as EU (Matif) rapeseed futures have continued to provide strong underlying support. Matif basis remained steady, in a range between –€24-27/MT whilst basis over Canadian ICE futures has strengthened CAD$15/MT over the past fortnight, now sitting at CAD$65.99/MT. New crop canola has been attracting some upcountry site premiums, however, the demand at these sites has been sporadic. Fortunately, there have been a multiple buyers seeking tonnages at the current price, maintaining competition in the market which is in the growers favour. 20/21 planted area to canola is expected to expand roughly 18% in SA, based on early analysis. This increase has predominantly been driven by high decile prices over the past two seasons, in addition to the need for rotation and good start to the season. Current estimates for national canola production are around 3.1MMT, up 25% on the 19/20 crop. 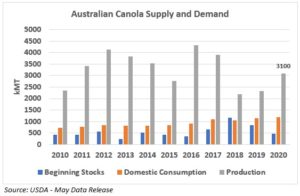 Matif rapeseed futures have continued to strengthen on the back of adverse spring weather. Recent reports have cut yield expectations for European rapeseed crops stating that a lack of soil moisture, above average temperatures and insufficient rains were the leading causes behind a 6.1% reduction in rapeseed yield. This reduction brings anticipated yields back to an average of 2.95MT/ha, 4.4% below the 5 year average. Current production estimates sit at 17MMT, only slightly above last years dismal crop of 16.9MMT. With the recent cut to yield estimates, this production could easily fall below last year’s crop, pushing it to the smallest EU rapeseed crop in 14 years. This will be Europe’s third year of below average production which is now leading to a supply deficit for their major biodiesel program. This lends strength to Australian canola, as well as approved varieties from Canada, as Europe will continue to outsource product for this program. 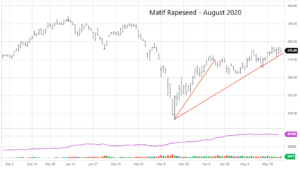 Canadian canola has continued to track sideways in a relatively tight range as the market continues to seek clear direction. On one hand, the typical market for Canadian canola is China, which has largely been cut off as political debacles continue between the two countries. The Canola Council of Canada has stated that the country had only been shipping around 30% of their normal exports to China and it appears as though this level won’t be exceeded for some time. Two of Canada’s largest canola exporters are still blocked from the Chinese market, while recent tightening of phytosanitary measures have limited capacity of some bulk exporters who cannot meet this specification. However, on the other hand, delays in seeding and germination amid cold weather and excessive soil moisture have supported Canadian canola futures, alongside ongoing demand into alternate European homes to fulfill demand for their biodiesel program.

Australian export opportunities have opened up with the dismal rapeseed crop in Europe and the lack of Canadian canola making it’s way into China. Last year, China became a bulk customer of Australian canola with ABS stats reporting that they were our second biggest export destination, second only to Germany. Canada’s loss appears to be Australia’s gain in the Chinese canola market, particularly as demand has increased as a result of the COVID-19 lockdown. This prompted an increase in home cooking with canola oil compensating for decreased use of palm oil in commercial kitchens. We must be mindful that any positive change in the China-Canada trade relationship could alter this marketing opportunity, therefore, it is something that we will continue to monitor closely.

The broader vegetable oil markets have also lent support to the oilseed complex as Malaysian palm oil futures rallied on governmental support for Indonesia’s biodiesel sector, alongside support for crude oil prices. This rally was then pushed higher as India made their first purchase of Malaysian palm oil since the start of the year, when importers were basically told to stop buying Malaysian palm oil following a political dispute between the two countries. Chinese demand of the tropical oil was also supportive as demand had previously been subdued due to COVID-19. The revival of Indian palm oil purchases from Malaysia comes amid a 30% drop in the price of palm oil since the start of the year, as Malaysia’s government decided to cut export taxes to 0% from June. This reduction in export taxes is equivalent to approximately $25/MT. At the same time, restricted movements and a national lockdown triggered a 14% drop in India’s palm oil imports leading to a sharp reduction in stocks.

Brent crude oil prices firmed significantly over the past fortnight, up 35% from this time last month, currently sitting at almost $35/barrel. This upswing has been driven by the high production cuts being implemented by OPEC and its allies plus the involuntary decline in production throughout the US due to COVID-19. Support has also been driven by the optimism of returning demand as lockdowns were eased in parts of Europe, notably Italy, France, and Spain.

Soybean values have once again come under pressure due to Chinese imports coming in below market expectations with the industry beginning to question the validity of the Phase One trade deal. The first week of the fortnight saw significant purchases from state backed Chinese crushers, however, this pace was not maintained into the second week. Unfortunately, this coincided with increased tensions between the two countries as Trump made discouraging remarks on Twitter regarding China’s part in the spread of COVID-19. The USDA reported that soybean plantings were at 53%, up 15% week on week and well ahead of the 5 year average (38%). This exceptional pace further compounded expectations for a large crop this season (estimated at 112.26MMT) and with US-China trade tensions continuing to escalate, the funds sought to offload long positions, consequently seeing the market weaken. Soybean futures are currently sitting on long term support of around 830c/bu, however, if the market breaks below this support it could be heading towards it lowest level in 10 years.

Brazilian soybeans have continued to be exported at a record pace, with May likely to be no exception as private Chinese crushers continue to favour Brazilian soybeans. Current estimates have exports for the month pegged at 16.58MMT which would set a new monthly record. This has continued to draw down stocks, with only around 20% of the total crop left to export.