China’s Anti-Dumping Investigation is due to come to a conclusion on May 19. However, yesterday China came out and indicated the potential for tariffs to be imposed due to escalating tensions between Australia and China over COVID-19. China’s Ministry of Commerce have given Australia 10 days, until the 19th May, to mount a case as to why the proposed 80% tariffs shouldn’t be imposed. China was Australia’s largest importer of Australian malt & feed barley prior to the anti-dumping investigation being launched, with roughly 4.5 million tonnes of Australian barley imported annually. A significant portion of the barley being imported was of malt quality, and this market will suffer the hardest if duties are imposed. So whilst an official result hasn’t been handed down yet, the outcome of the investigation has already has significant ramifications for local barley prices. It will effectively cease exports of Australian barley to China.

Australia’s Alternatives – If tariffs are imposed, Australia will have to turn to other destinations like Saudi Arabia, Japan and South Korea to take the additional tonnes. The question then becomes, what price will our barley have to fall to in order to be competitive into the Saudi market? The most recent barley tender from Saudi Arabia approximately a month ago saw them purchase barley for US$198.63/MT C&F. If we work this back to a track equivalent in Australia it equates to an AUD$222.4/MT using today’s currency. However, we expect the Saudi Arabia figure to be significantly lower now than it was a month ago.
If we are to compete into the Saudi market, we will be up against cheap barley such as that from Russia. This is already being reflected in the new crop barley pricing today, where the Outer Harbour market hit $215/MT. We can see that while this was a significant decrease from last week, traders now must be competetive against cheaper origins. The table shows how the new crop price at Adelaide was determined by the current new crop barley price out of Russia. 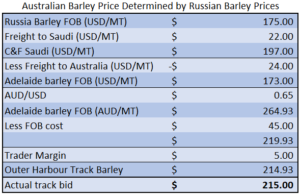 While this is currently the price at which our barley is competitive into Saudi Arabia, this price can certainly grind lower if we have a large US corn crop this season.

Feed Market Competition – If we are forced to be competitive into the Saudi feed market, we must keep in mind that there is currently an abundance of cheap grain around the world, mainly corn. The global corn market has come under significant pressure amid the collapse in the oil demand, with demand for oil alternatives such as ethanol also falling away significantly. Corn acres are also being planted at record pace across the US, meaning there is potential for a significant US corn supply again this season, with the IGC forecasting a record US corn crop this season at 388.8MMT, up 11.7% y/y. If the global corn price were to fall further, our barley price may come under further pressure to stay competitive. This is the same story with the Black Sea barley crop. An almost record barley crop is forecast out of Russia.

As mentioned above, the result of the investigation hasn’t been handed down yet, but this does give you a road map of the potential path we could be travelling down if tariffs are imposed in the May 19 decision. While Saudi is likely to be our major feed market should we be priced out of China, there are also markets into Thailand as well as malt markets into Japan and South Korea.
New crop values – Let’s now take a look at what has been happening in the barley market outside of the anti-dumping investigation saga. There have been some decent falls across the Black Sea and EU, as well as Australia which has been putting pressure on pricing in the last fortnight. Currently all the major climate drivers for Australia are pointing towards 2020/21 season being a wet season and, in these years, historically we’ve seen barley spreads push out come harvest time. At the moment all grain buyers are only offering floating malt spreads. However, with feed barley spreads there is the option to either fixed or float them. We advise you to take advantage of spreads at -5/MT for BAR2 and -$10/MT for BAR3. The other factor which has been influencing barley values has been the $Aud. The announcement of a road map for Australia to return to a COVID-19 free economy last week saw the $Aud rise again to circa 65 cents and has continued to trade around this figure.

The major concern remains the potential for a large domestic barley crop, with early barley production forecasts coming in at 9.4MMT, up 14% on last season. Much of this increase is expected on the east coast. If they are to have a rebound in production, South Australia may not have access to the east coast feed market as we have over the past two years, meaning we would have to go back to purely export demand.