Canola prices recently reached highs of $615/T in Outer Harbor and Port Lincoln before dropping $45/MT. We saw basis over European (Matif) rapeseed prices move to €16 higher than the season average to-date. With the recent drop in cash prices, basis has since returned to average levels. The upward trend we were seeing in Matif futures broke below recent support at €385 and is trading between €375-€380. Since the start of October, rapeseed futures have shifted 2.2% lower, corresponding to a similar increase in the Euro. Aussie canola cash prices have felt the effect of the recent decline in Matif, coupled with weakness in basis. On the supply and demand side of the equation, not too much has changed; Europe still needs a decent oilseed supply, whilst Canada and the US still need a home for their oilseeds which retain their potential to squeeze Australia out of the EU market.

In Europe, the last couple years have been dismal for their rapeseed crops, helping push Aussie canola prices higher in years where we’ve had drought woes. Widespread pest damage and dry conditions last year, in conjunction with a reduced EU rapeseed planted area, resulted in a production figure of 16.93MMT. This is 20.6% lower than the five-year average. According to the EU commission balance sheet, rapeseed usage figures for the EU point towards 22.94MMT, meaning a deficit of 6.02MMT requires supply from imports and carryover stocks. Looking ahead, this year’s rapeseed planting has progressed under better conditions than the previous two years. Although drier than normal weather exacerbated drought in France, 100-200% of normal rainfall improved moisture reserves for crop establishment in Germany. There is obviously still a long way to go for the new season in Europe, and it won’t help with supply in the short term but does lead us to think that canola prices could potentially be lower in the new year. 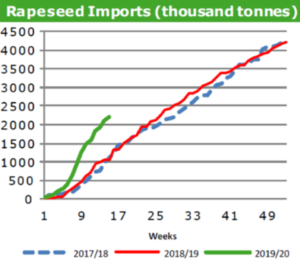 Canada – There’s a reasonable expectation that Canadian GM canola exports into Europe will increase to offset Canada’s substantial carry-over stocks. Exactly how much of Canada’s canola will be exported is highly dependent on how many Canadian growers make use of sustainability recognition through ISCC, a process many farmers there aren’t overly familiar with.

The USDA estimates Canada’s canola production for 2019/20 at 19.5 MMT, down 0.6 MMT from last month and down 0.8 MMT from last year. Yields have been revised but are up 4% on last year. A month-to-month decrease in yield can be attributed to an early winter snowstorm that occurred in late September, which dropped several inches of snow on the Canadian Prairies. In addition to the snow, an early season-ending freeze occurred in the main rapeseed growing regions of Alberta, Saskatchewan and Manitoba, which produce 24%, 50%, and 15% of the nation’s crop, respectively. Canadian sources expressed concern about both lodging and pod shattering in the high moisture seeds. Small declines in this year’s crop for Canada is of minimal concern since there’s still over 4MMT of carry-over stock to contend with.

US Soybeans have been adding some support to the oilseed complex as the US and China have made some progress. The countries were able to reach a limited deal last week, with both sides working toward a written agreement. At the very least, the recent steps could stop further escalation of the trade war. China has been continuing to import US soybeans (but at a much lower volume) which has kept nudging the market along, but they’ve also continued purchases from Brazil since last week’s meeting. Effectively, China is keeping its options open and doesn’t appear to be in a hurry to rush back toward US products. So, without anything substantial in writing, we will have to wait and see exactly how “great” the deal will be for US growers and the soybeans market. 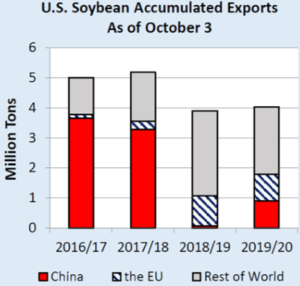 Globally, the supplies for oilseeds remain at relatively comfortable levels, despite the year-on-year production decline of 22.6MMT (now 574.85MMT forecast). Trade flows of canola and soybeans into China are throttled this season due to the trade wars between China and the US as well as Canada. The latter represents a potential opportunity for Australian canola, but the demand (mainly canola/soy meal) is expected to be lower due to the African Swine Fever that continues to ravage the pig herd.

Australia – As we approach the finishing line for the growing season in Australia, the canola crop quality is looking varied state-to-state. We saw that in the last report from Western Australia, the state is likely to see production dip below one million tonnes for the first time in 10 years. In comparison, the WA canola crop has averaged closer to 1.6MMT over the last 5 years. The cause for production issues has been the lack of rainfall for the season and recent frost events. Over the last month, WA has seen below-to-very much below average rainfall and is reportedly the the third driest September on record. Despite this, Canola has hung on longer than expected for the central and northern regions of the state.

In SA, the crops are faring slightly better, but the lack of decent finishing rains and some warm windy days is cause for concern. The general expectation is that canola production in SA will be up on last year, but production risk remains. In VIC, canola crops are looking significantly better, with production expected to be around 600,000MT, double that of last year, and over twice what SA can be expected to produce this year. 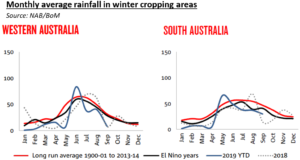