Tensions between Australia and China still remain frosty. Australia has been trying to contact China regarding the anti-dumping claims for over a month now but haven’t succeeded in speaking with anyone. China is basically ignoring all attempts. The Australian government and industry officials have indicated that they would prefer to avoid lodging an appeal with the World Trade Organisation (WTO) as it can take years for a result to be reached. However, this could be the only avenue if China continue to refuse to speak with Australian officials. As mentioned in our previous report, Australia can lodge an appeal within the Chinese judicial system within 60 days of May 18, however, there hasn’t been any indication as to whether this option is being considered. The loss of China in the Australian barley market has been estimated to cost the industry $330 million (ABARES), but industry officials believe this figure could be significantly higher.

Local barley values – are currently trading at $216/MT in Adelaide & Port Lincoln, $213/MT in Port Giles and $207/MT in Wallaroo. Barley has been flat around these levels over the past couple of weeks, with the $Aud having a major impact on cash prices. The $Aud tested the 70 cent mark numerous times over the last fortnight but has struggled to maintain momentum. It is currently trading around 68-68.5 cents. Escalating tensions with China and fears of a second wave of COVID-19 in Australia have created volatility for the $Aud, pushing values lower. The spread between wheat and barley has closed slightly since our last report, now sitting at $64/MT, mainly driven by weakness in wheat values due to harvest pressure from the US crop. Pricing at these levels places barley values at a decile 3.22 for Outer Harbor and a decile 3.33 in the Port Lincoln zone. The prices we are currently seeing for barley are competitive in the Saudi market, which is typically the floor of the global barley market. However, as you can see in the table below the margin for traders is quite small. 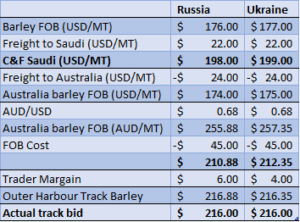 Global markets – Whilst local barley values currently remain competitive into the Saudi market, there are a number of bearish factors which could see values grind lower. The USDA increased their estimates for the 2020/21 global corn crop 1.6MMT to 1,188MMT. The US 2020/21 corn crop is projected to increase by 60.4MMT YoY to 406.29MMT. The increase in US production is attributed to a 7.5% YoY increase in planted area to corn, however, values are still trading between to 340-350USc/bu, which is 40-50USc/bu below pre COVID-19 levels.

Global barley production was increased in the June WASDE report to 155.26MMT, however it is still forecast to be down 1.02MMT YoY. Russian barley production has been slightly downgraded by 0.2MMT to 17.3MMT in the June WASDE. The EU barley crop on the other hand has been increased to 64.10MMT, 7% higher than the 5 year average, due to increased spring barley planted area and favourable weather. Australian barley production has also been further increased by ABARES to 10.6MMT, up 1.6MMT YoY, due to favourable weather conditions. Barley area is predicted to be 55% higher in NSW and more than tripled in QLD (YoY) according to ABARES. In SA barley production is forecast to increase to 2.1MMT, up 250KMT YoY. An abundance of cheap corn and adequate supplies of barley globally will mean there will be plenty of competition within the feed grains market, leading to concerns that barley prices could be pressured lower in Australia. Seasonally, a large NH corn crop can significantly drag on our prices into harvest.

There have been several successful tenders for barley in last fortnight. Feed barley purchases were made by Tunisia (50,000MT), Thailand (25,000MT) and Saudi (1.08MMT). Prices of these tenders indicate that Aussie barley is competitive, with Thailand’s purchase made entirely out of Australia for August shipment. This is positive for more purchases from Thailand out of Australia as they navigate a drought.

India – Over the last couple of months, the relationship between Australia and India has been strengthening. The signing of the India-Australia Comprehensive Strategic Partnership earlier in the month has been a step in the right direction. It is hoped that this partnership will allow Australia to negotiate a minimal (instead of zero) tolerance for ryegrass and wild radish which can occur in Australian barley crops to open up export opportunities. India has already changed its fumigation requirements which now allows Australian malting barley to be exported to India. The previous requirement of methyl bromide fumigation meant Australian malting barley was unable to be exported into India as methyl bromide denatured the seed and impacted on the malting process. Whilst India won’t replace the 2-4MMT of barley China usually purchases, they do have a 500,000MT malting capacity.

Malting spreads – Over the past fortnight we have continued to see malt spreads offered between $3-$7/MT depending on the port zone. However, with the ongoing uncertainty around access into malting markets the majority of buyers are only offering floating malt spreads. China was a major player in the Australian malt market and although we do have opportunities opening into various countries like India and Thailand. There will also be opportunities for malt into domestic homes like Coopers and Boort Malt, however these opportunities will be limited and will by no means fill the gaping hole left by China. It is definitely worth considering locking in some malt spreads if we see the premium widen out to $10-20/MT. At this point in time CloudBreak would recommend having a mixture of floating and fixed malting spreads to allow for harvest arbitrage.