Grain Snippets: Barley Out of Breath

Grain Snippets: Barley Out of Breath

The Australian barley market continued its upward momentum through the first half of January as short covering and a lack of grower liquidity continued to play on the market, only to fall away late last week. Barley 1 in the Outer Harbour zone rallied up to $25/MT from the beginning of the month alone, however, has since pulled back and is now trading at $285/MT, just a $15/MT rally since the beginning of January. A slightly lesser rally has been seen across the state’s other zones, with barley at Port Giles, Wallaroo and Port Lincoln and it seems a softer tone is now lingering over the barley market.

Domestic Market – While the past few days have seen the barley market significantly softer, the first half of the month saw prices firm up. In years gone by, January has generally been a month where ag markets soften. This usually takes place as traders have purchased significant quantities of grain through harvest and their appetite begins to soften post-harvest. However, this season has seen a change, with the market not just holding up but rallying through January. Traders and end users this season have approached their purchases with more caution than last season, with end users only buying hand to mouth, compared to covering themselves out to mid-year as we saw in the 18/19 season. This has meant that rather than demand dropping away like last year, demand from end users has been constant as they continue to try and fill short term demand. At the same time, growers have been reluctant sellers, given they are very well sold for this time of year. This combination of lack of selling and end user short covering has continued to see the market push higher. Barley has also been supported somewhat by the wheat market. With a spread of around $65/MT, barley has been dragged higher by the strength in the wheat market. 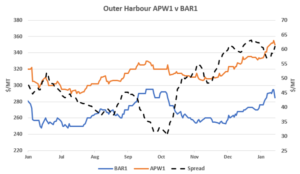 East Coast Market – With the recent rally, prices are now at significant levels when compared to historical values, currently sitting at a decile 9 at Outer Harbour and a decile 9.2 at Port Lincoln. We continue to monitor the east coast market as a key indicator as to if the recent rally is sustainable, given it is one of our major markets this season. Currently barley delivered to the Darling Downs is trading at $403/MT, $118/MT above the current price at Outer Harbour. In order to be profitable into the Darling Downs market, barley at Outer Harbour generally needs to be trading at around a $115/MT discount to the east coast market. This is currently the case, so SA barley is still workable into the east coast, however moving forward, the performance of the SA barley market will depend heavily on how the Darling Downs market performs, and currently it is showing a few signs of slowing. While still at its highest point since early October, the east coast market has failed to break above the $410/MT level multiple times in the past week. The Western Australian market was also significantly softer late last week, and as such, values in SA also weakened in order to remain competitive against WA barley.

Global Market – While Australian barley has been priced above export parity, the global market will still play a role in local price movements. The latest USDA report saw global barley production decline slightly for the 1920 season, down 0.5% to 156kMT. The report also pegged Australian exports at 3.8MMT. The concern over this figure is how Australia will find a home for a barley surplus of 3.8MMT when it currently trades so far above export parity. In essence, Australia is lacking a significant export market at current levels, something we will need going forward.