Imidazolinone – One of the major risks currently surrounding the Australian barley market is the reduced Maximum Residue Levels (MRL) applied by Japan and South Korea. Both Clearfield varieties of barley available in Australia (Spartacus CL and Scope CL) can have Imidazolinone (IMI) chemicals applied. However, doing so at this stage may see the barley be restricted from being marketed into these two international markets. At this point, the major South Australian bulk handlers have not released any further information as to whether barley treated with IMI chemicals will be segregated from barley which has not. Such uncertainty makes it difficult to make a decision on applying the chemicals. Perhaps though we can take some guidance from the east coast’s major bulk handler, GrainCorp. GrainCorp this week announced they would be taking action to ensure they can effectively market Spartacus CL and Scope CL into these overseas markets. In order to do so, GrainCorp will require growers who deliver into their network to declare the use of IMI chemicals on Spartacus CL and Scope CL upon delivery. Barley declared to have been treated with IMI chemicals will then be segregated by GrainCorp into feed barley segregations. This essentially means that any barley treated with IMI chemicals will not be eligible to be classified as malt, even if the specifications meet malt standards. As a result, an important decision needs to be made by growers as to whether or not they treat their barley. Last season we saw malt premiums in South Australia peak at $80/MT above feed barley! The concern is if barley is treated with IMI chemicals, the potential to earn such a premium is automatically foregone. However, keep in mind the major reason behind the malt premium rally was China, who continue to add nothing but further uncertainty to the market at this stage.

Although there is much uncertainty around whether these MRLs will be increased, industry bodies are working closely with various overseas nations in an attempt to have them adopt IMI MRLs on barley that are more aligned with Australian standards.

China – China is the other major threat facing the Australian barley market. The anti-dumping probe result remains in limbo and there is still no further information to indicate whether or not a 56% duty at stake will be applied. We do know that China have 12 months from the announcement of the investigation to come up with their findings and implement an action. There is also the option to extend this timeframe by a further 6 months if required to do so. However, China could impose preliminary duties at any time, even if the investigation is incomplete.

Domestic – While the risks on the international market are no doubt building, there is a chance these risks may be outweighed should the local market have production issues. While WA rainfall has improved for this season, the situation through the northern half of NSW and into QLD has been made clear over the last week, with the first WA new crop vessel booked for Brisbane. Both new crop wheat and barley from WA has traded into Brisbane and reflects the reality of the poor winter crop outlook through this area. WA grain has supplied end user requirements through the 18-19 season and this recent booking suggests this will continue into 2020, with eyes on WA’s season as a result. The season through northern NSW and into southern QLD is no doubt moving towards being on a knife’s edge and a lack of further rainfall will see values well supported moving forward. 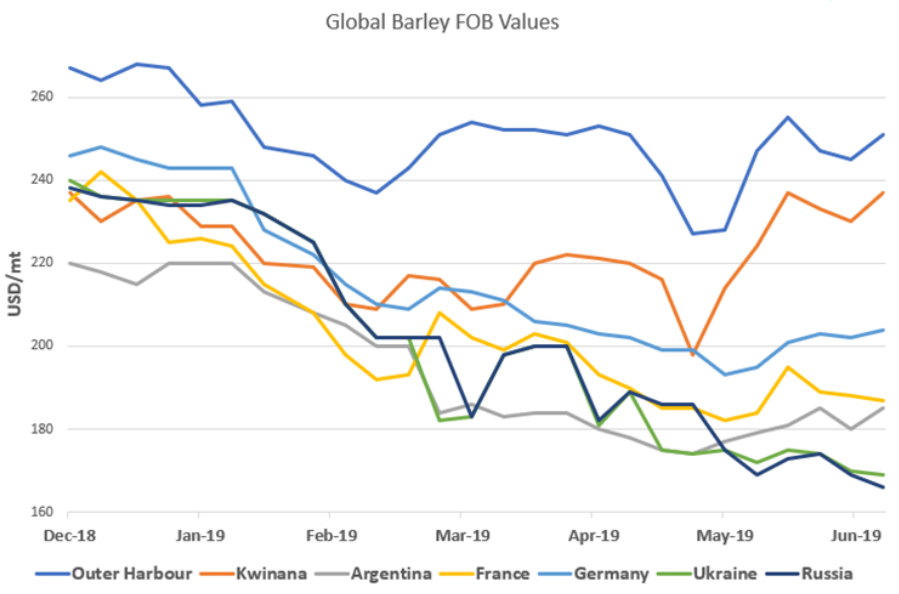 Global – The reliance on Australia’s domestic market to support prices is even more evident when assessing the global situation. Global barley production is expected to be up 8.4% this season to a record 152MMT. Thursday saw the release of the most recent Statistics Canada Principal Field Crop Report, which saw Canada’s barley area planted increase by 14% year on year to reach 3m Ha. The impact of the large global barley crop is evident when looking at recent global barley values; where for example new crop values out of the Black Sea have continued to slide. The world coarse grain complex is facing a year on year increase in stocks, with barley ending stocks expected to increase by 17.5% this season and bringing stocks/use to 13.6% this season, up from 12.2% last year.

Corn – The US corn market continues to be the story out of the US, with the weekend’s US stocks and acreage report adding further volatility to the market. The report detailed that despite the significant rainfall across the corn belt, area planted was actually up on last season at 37.1 million hectares. This is an increase of 2.8% on last season and comes in a staggering 5.7% or 2 million hectares above the average trade estimates. This result shocked the market, with corn futures falling 40c/bu over the past 3 days. . These corn estimates will be re estimated and released in August. The overall condition of the crop sits at 56% Good/Excellent, well below the 5-year average of 73% for this time of year. 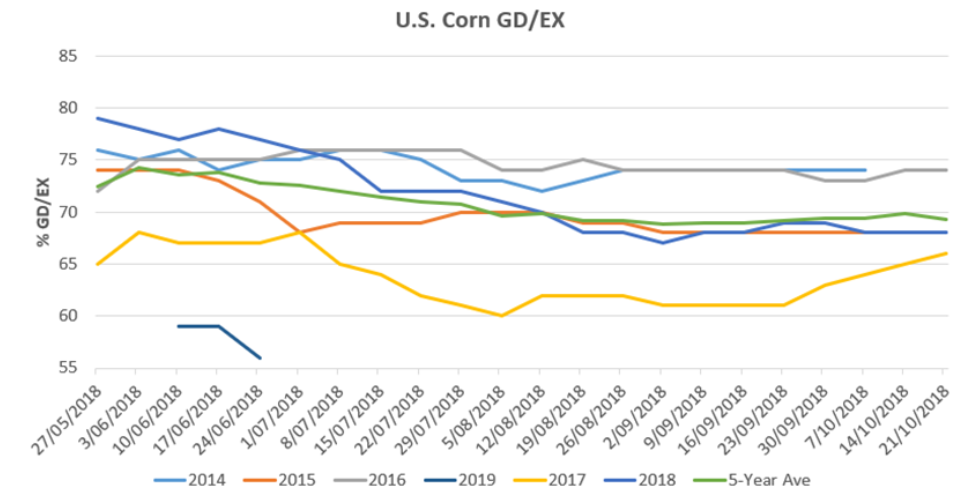