Soybean values have continued to taper off in a broad downward trend on uncertainty regarding the impact of coronavirus and the lack of clarity/action regarding agricultural purchases from China, following the US-China trade deal last month. The nearby March soybean contract has now fallen from its most recent high of 956c/bu to 877c/bu, equating to an 8% drop in price since the beginning of January. Monday night did see soybeans close slightly higher than Friday, up 5c/bu. Despite the signing of the deal, it has effectively outlined a truce, written with enough ambiguity as to form no tangible commitments regarding specific grains. Without more commodity-specific information in the deal, the vague nature of the deal’s language has caused soybean markets to continue to shift lower. All eyes will be on the soybean market this week as China return from the lunar new year holiday and US traders will be waiting to see whether the lower soybean prices encourage some Chinese demand. China was expected to continue to purchase “cheap” soybeans from South America, however, with the significant pull back in US soybean values, FOB prices out of the US Gulf now sit at US$352 vs. US$350-351 out of Brazil/Argentina. 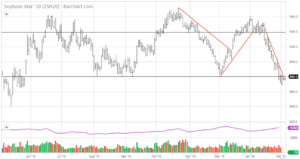 Canadian canola has also continued to weaken on the back of soybean losses but saw a slight lift overnight. Year to date canola exports are currently 9% behind the same time last year, interestingly though, canola crushing rates are 15% higher year-on year as Canada aim to find alternate destinations for meal & oil. Following last years debacle with Huawei, Canada have been aiming to increase crush capacity in order to capture some EU demand. The crush pace doesn’t look like slowing down at the moment either, with crush margins currently above $100/MT. Agriculture & Agri-Food Canada (AAFC) left canola ending stocks unchanged at 3.5MMT in their most recent report, however, this may be lowered if the impressive crush rates and margins hold up. The AAFC also gave their first estimates for the 20/21 Canadian canola balance sheet, with area down 2.1% and production 5.9% lower. These lower figures should help see some support within the oilseed market.

EU rapeseed futures have continued to decline with palm oil trade disputes weighing on the market. Rapeseed values had rallied for 11 weeks straight, gaining over 10% in price in that time frame, but in just 3 shorts weeks, lost 7% of price value. March rapeseed futures currently sit at €387.25. Malaysia’s biggest palm oil export destination, India, restricted imports in mid-January and informally stopped purchases of refined palm oil on the back of political retaliation against the Malaysian prime minister. Crude palm oil has also seen the import tax into India raised from 37.5% to 44%. Alongside this, the spread of coronavirus throughout China (Malaysia’s second largest destination) has hindered economic growth and in turn reduced a level of demand for palm oil, amongst other products. This has impacted the vegetable oil complex as a whole with a potential reduction in demand for veg oil and associated meal imports, hence, the downturn seen on the Matif futures chart. Crude oil markets have also fallen on concerns regarding trade flows and global demand following the coronavirus outbreak. The fall in crude oil markets has also contributed to weakness in rapeseed values. 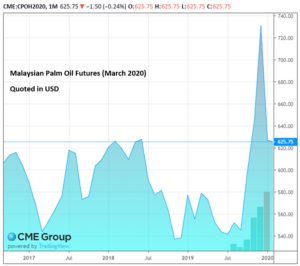 Over the past fortnight, local canola prices rose on the back of shipping shorts in the Outer Harbour and Port Lincoln zones. Outer Harbour bids peaked at $630/MT last Thursday before softening back to $600/MT yesterday afternoon. Prior to the short covering rally, prices had been fluctuating between $595-$615/MT since the beginning of the year. From what we can see, there are very little canola tonnes left in the system or on farm, driving the lack of liquidity and subsequently the price increase. The limited supply in SA is a double-edged sword; on one side it allows growers to capitalise on prices of decile 9.5+, whilst on the other it means that exporters will seek bulk tonnes elsewhere once their immediate needs are filled. There are two canola vessels set to depart Outer Harbour during February, but beyond that, there is little clarity regarding any further shipments. Keeping in mind we are at the point of the year where canola shipments tend to peak and with limited tonnes remaining, we are unlikely to see any similar capacity in the months to come. Global drivers are now more likely to impact the local cash market with weakness in soybeans, Canadian canola and EU rapeseed. Currently, basis sits at (€30.77) which has been relatively average for the season, however, last week it peaked at (€18.59), its best level since October 2019. 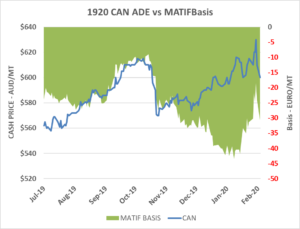 20/21 canola area looks set to increase around 3% globally with a lift in area planted in Europe, Russia and China according to the IGC. However, as mentioned above the AAFC have lowered their estimate of planted area in Canada by 2.1% due to ongoing trade concerns with China. There is expectation that Brazil and Argentina could be heading for a record soybean crop this year and that the US may see an increase in planted area and production following the poor season in 19/20. Recall, that the US mid-west was hampered by excessively wet weather in June/July last year, which saw a large portion of growers claim “Prevent Plant” insurance on their soybean fields. There are no firm production estimates for soybeans yet and we will be awaiting the February WASDE to see these initial figures. Locally, we expect canola acreage to change very little after the large pullback for the 19/20 season. Looking at prices, soybean futures, Canadian canola futures and Matif futures have all seen a similar downturn that nearby contracts have, due to global fundamentals discussed above. Australian new crop cash prices have been fluctuating between $570-580/MT and basis has been relatively week against Canadian ICE at just CAD$32-39. Matif basis has been sitting at average levels between (€35-37).